When I met the Compagnia Marionettistica Carlo Colla & Figli the first time four years ago I suddenly understood that so many people all over the world fell in love to this puppet theatre after they got in touch with this charming and modest people from Milano/Italy.
So – with your support – I will make a full-lenght documentary about the people, the history, the craft and the art „the Collas“ are doing to enchant their audience. There will be two version: English and Italian.

What you should know about the film, the raised money and the project at all

What you should know about the film, the raised money and the project at all

The project, the Collas and me: This is the first crowdfunding ever I start. Asking people to give money for my own personal effort is not something I take lightly.
I raise money to make a documentary about the fascinating Milan Compagnia Marionettisti Carlo Colla & figli which I met the first time four years ago when my team and I prepared for a recording of the baroque opera „Rinaldo“ performed by „the Collas“ for an Arthaus-DVD. We met fascinating people who are modest and stand almost shy behind their craft and thus enchant their audience with true passion. My fascination grew when I spent a summer day in their Milan atelier and shot some pictures (which you can see in the trailer). I watched them building, repairing, tailoring, carving, painting … As my fascination about the Collas grew, so did my will to make a full-length documentary about them. I want wo produce a film that is entirely dedicated to its subject, which avoids the doubts of TV editors about expected audience ratios as well as profitability calculations of production companies. A film that is financed by people who are as interested as I am in the Compagnia Carlo Colla & figli. The Collas are an impressive living, contemporary monument to craftsmanship that assert themselves in an increasingly digitally networked world with their analogue art, which focuses on the moment of the experience of a theatre performance.

Let me take you by the hand to accompany the Collas, in the coming year. You will have a look backstage, so you will see how they develop a production from the very beginning to the premiere. You will get to know people, their lives, their passions, their motivations. How they found their way to the tradition of puppet theatre, which relationships they have with their wooden protégés. Together we will get to know a group of artists who live with their craft between tradition and transition. And we will learn that the Collas follow a long line of tradition that began 200 years ago. They have been pop stars and they had breaks: fame and sadness, success and defeats all that in one history. They were a national monument of arts in northern Italy. 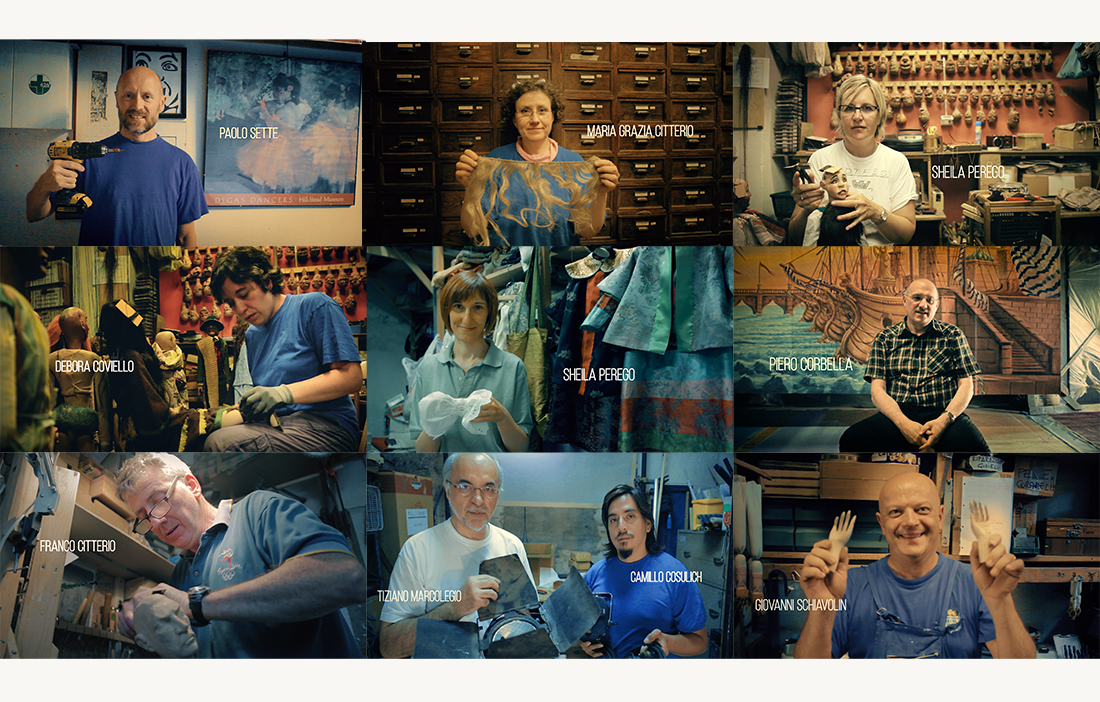 We will talk to the puppeteers and to people who have accompanied, supported and encouraged them, people who worked with them. We are going to go on tour with them to the Spoleto festival dei due mondi in Charleston/SC and to New York in November where they will perform a week at a theatre near the Broadway.

We will also accompany the Collas when they move their atelier to a new location, when they prepare the grand opening of their museum in Milan/Italy.

Look and feel: I imagine a quiet, sensitive documentary film that accompanies the collas and lets the protagonists show us their world. A film that takes time to watch. A film that gives its protagonists enough space to tell the audience their story.

The money: This is the first crowdfunding ever I start. Asking people to give money for my own personal effort is not something I take lightly. But I’m convinced that the own personal effort turns into something to share: I am sure that I can give a lot back: a documentary film with an interesting subject, an insight into a wonderful world of puppet theatre, a glimpse at a time that only seemed to be long gone – but the Collas keep alive.So we calculated the fundamental costs it will take to make the planned documentary. Most of the money (about 70%) is needed for the filming, the lighting and camera, team and equipment. Technically we don’t skimp on image and sound quality: as little as possible, as much as necessary for the best result. We hope we can manage the postproduction with about 15%; organization, insurance, unexpected issues and so on: about 5% and finally 10% for transportation to the locations in Italy, Germany and the USA.

Every donation counts. If you are unable to support the project financially, sharing will also help.
In addition to what you can contribute, you can support our search by publishing the campaign on all kinds of social media and encouraging your friends and co-workers to contribute as well.

I really can’t overestimate what your participation means to me.

Please support the project on Indiegogo

or by classic bank transfer:

As a matter of course, I will be liable for any contributions transferred via account to the same extent as announced on Indiegogo.